Each concrete pavement surface texture shown above produces a different noise level, and at different frequency spectrums (tones). Historically, the highway community has focused only on overall sound levels. In the 1990s, however, it was demonstrated that the frequency of the sound produced by the surface texturing effects what you hear as much as the overall sound level does, particularly with uniform transverse tined pavements, which were recommended by the FHWA until recently. Transverse tine textures produce tonal spikes that we recognize as the “tire whine” heard as you travel down the road. Today, these issues are understood and the FHWA, in 2005, modified their requirements to allow other textures for concrete pavements that could potentially eliminate the tire whine. 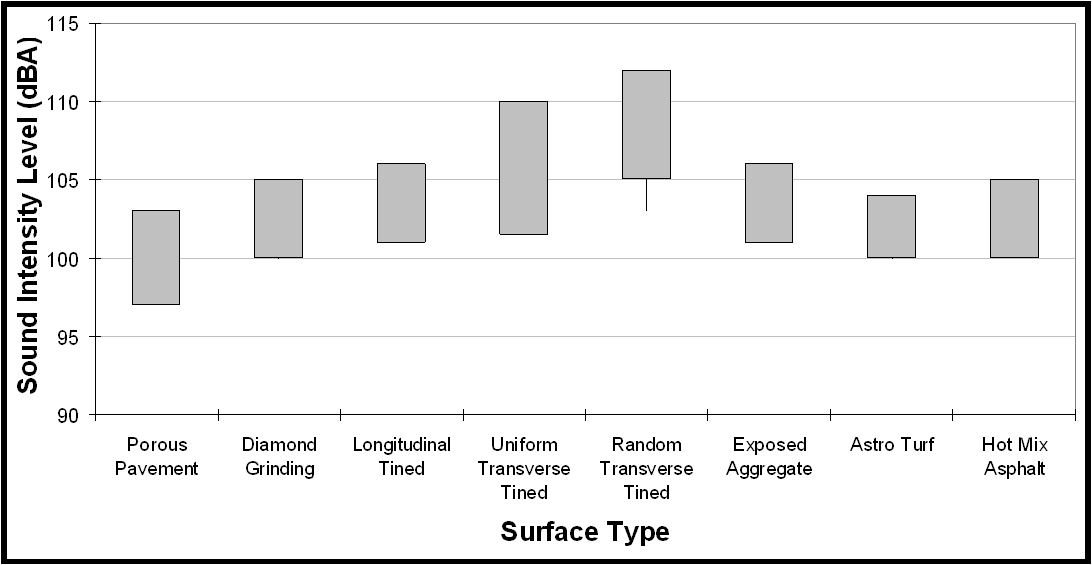 Sound level is primarily a function of the surface finish, not the material it is constructed of… The plot above shows typical ranges in over all sound levels for different concrete surface textures and types and typical hot mix asphalt.

There is variability in the sound produced from all textures (even porous asphalt)… The range of sound levels produced by concrete pavements is on the order of 16 dBA. When a sound increases by 10 dBAit seems twice as loud, so such variability can be quite significant.

You get what you spec… Simply by specifying a turf drag, diamond ground or longitudinal tined texture in lieu of a random transverse tined texture, it is possible to cut as much as half the noise on a concrete pavement. 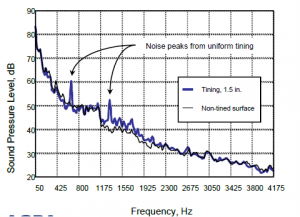 The figure on the left shows the sound spectrum produced by two concrete surface textures. The tonal spikes that occur in transverse tining at about 600 and 1200 hzare what we hear as tire whine. Unfortunately, transverse tining is the texture FHWA has required for the last 25 years. Today, states may use textures that remain durable and safe over many years of service, but without the tire whine.