The American Concrete Pavement Association Board of Directors is the governing body of the Association. It directs, supervises and controls the activities of the Association, its committees, published information and other means of communication. It may delegate duties and responsibilities to various staff, officers, agents and/or committees, but always retaining the privilege and responsibility of final review and approval.

Although final responsibility for the Association ultimately rests with the general membership, the Board of Directors is the Association’s effective governing body. A leadership role in the Association requires sacrifices of time and effort, and in that spirit, directors should be members of firms actively engaged in the concrete paving industry, as an individual possess the same qualifications of skill and integrity that all Association members should demonstrate, devote the time, capability and willingness to attend National Board meetings, become involved with any local chapters or affiliates that they may belong to, and communicate and promote national programs and policies at the local chapter or affiliate level.

Composition of the Board and Eligibility Requirements

ACPA Board members are volunteers from member companies and affiliated organizations, including the ACPA-affiliated Chapter/States and the International Grooving & Grinding Association. The ACPA Board of Directors is composed of individuals representing the membership from the various membership classes. There is no requirement for the number of directors from any specific class of members. The Board of Directors consists of a minimum of 17 and maximum of 22 voting directors. The Chapter/Committee holds two ex-officio director positions on the Board of Directors. Any executive or employee appointed by a member in good standing to represent its interests in the Association is eligible for election to the Board of Directors.

The 2020 ACPA Board of Directors 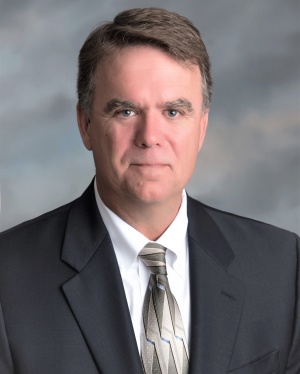 ACPA's current (2021) Board of Directors is comprised of the following officers and directors:

ACPA's First Board of Directors: 1964 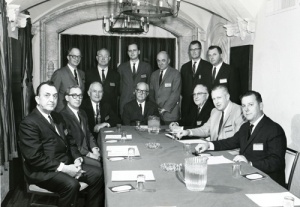 First Meeting of the ACPA Board of Directors. 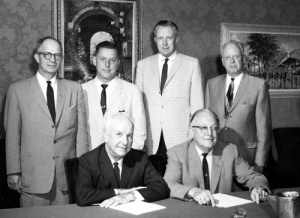 Interim officers for the newly formed ACPA are shown in the photo to the right. They are: (seated, L to R) Sam M. Porter and Harold W. Hartmann. Also (standing, L to R) James D. Piper, Charles Ballenger, W.E. Swanson, and George C. Koss. (Not present were Fred Rowe and William Tate.)[2]