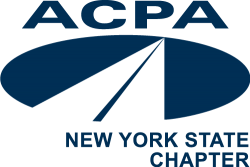 The Northeast Chapter, the first affiliated chapter of the American Concrete Pavement Association (ACPA), was formed in April 1987 to promote quality concrete pavements in the 13-state Northeast quadrant of the U.S. -- from Virginia to Maine. In January 2006, to better serve our members and customers, the Northeast Chapter divided into three independent Chapters, which are the Mid-Atlantic, New York State and Pennsylvania Chapters.