Consideration of the flexural strength of the concrete is applicable in a design procedure for the fatigue crite­rion, which controls cracking of the pavement under repetitive truck loadings. 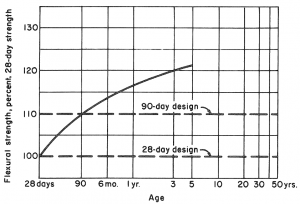 For specific projects, the concrete mix should be de­signed to give both adequate durability and flexural strength at the lowest possible cost.

Modulus of rupture tests are commonly made at 7, 14, 28, and 90 days. The 7- and 14-day test results are com­pared with specification requirements for job control.

Concrete continues to gain strength with age as shown in Fig. 1. Strength gain is shown by the solid curve, which represents average MR values for several series by lab­oratory tests, field-cured test beams, and sections of con­crete taken from pavements in service.

The support given to concrete pavements by the subgrade, and the subbase where used, is the second factor in thick­ness design. Subgrade and subbase support is defined in terms of the Westergaard modulus of subgrade reaction (k). It is equal to the load in pounds per square inch on a loaded area (a 30-in.-diameter plate) divided by the de­flection in inches for that load. The k values are expressed as pounds per square inch per inch (psi/in.) or, more commonly, as pounds per cubic inch (pci).

Since the plate-loading test is time consuming and ex­pensive, the k value is usually estimated by correlation to simpler tests such as the California Bearing Ratio (CBR) or R-value tests. The result is valid because exact deter­mination of the k value is not required; normal variations from an estimated value will not appreciably affect pave­ment thickness requirements. The relationships shown in Fig. 2 are satisfactory for design purposes.

The AASHO Road Test[1] gave a convincing demon­stration that the reduced subgrade support during thaw periods has little or no effect on the required thickness of concrete pavements. This is true because the brief per­iods when k values are low during spring thaws are more than offset by the longer periods when the subgrade is frozen and k values are much higher than assumed for design. To avoid the tedious methods required to design for seasonal variations in k, normal summer- or fall-weather k values are used as reasonable mean values.

The term design period is used in the realm of pavement design rather than pavement life. The latter is not subject to precise definition. Some engineers and highway agencies con­sider the life of a concrete pavement ended with the first rehabilitation. The life of concrete pavements may vary from less than 20 years on some projects that have carried more traffic than originally estimated or have had design, material, or construction defects to more than 40 years on other projects where defects are absent.

The term design period is sometimes considered to be synonymous with the term traffic-analysis period. Since traffic can probably not be predicted with much accuracy for a longer period, a design period of 20 years is com­monly used in pavement design procedures. However, there are often cases where use of a shorter or longer de­sign period may be economically justified, such as a spe­cial haul road that will be used for only a few years, or a premium facility for which a high level of performance for a long time with little or no pavement maintenance is desired. Some engineers feel that the design period for rural and urban highways should be in the range of 30 to 35 years.

The design period affects thickness design since it determines how many years, and thus how many trucks, the pavement must serve. Selection of the design period for a specific project is based on engineering judg­ment and economic analysis of pavement costs and serv­ice provided throughout the entire period.

The numbers and weights of heavy axle loads expected during the design life are major factors in the thickness design of concrete pavement. These are derived from esti­mates of

Information on ADT is obtained from special traffic counts or from state, county, or city traffic-volume maps. This ADT is called the present or current ADT. The design ADT is then estimated by the commonly used meth­ods discussed here. Any other method that gives a reasonable estimate of expected traffic during the design life can be used.

In a design problem, the projection factor is multiplied by the present ADT to obtain a design ADT representing the average value for the design period. In some proce­dures, this is called AADT (average annual daily traffic).

The combined effects will cause annual growth rates of about 2% to 6%. These rates correspond to 20-year traf­fic projection factors of 1.2 to 1.8 as shown in Table 3.

The planning survey sections of state highway depart­ments are very useful sources of knowledge about traffic growth and projection factors.

*Factors represent values at the middesign period that are widely used in current practice. Another method of computing these factors is based on the average annual value. Differences (both compound interest) between these two methods will rarely affect design.

Where there is some question about the rate of growth, it may be wise to use a fairly high rate. This is true on intercity routes and on urban projects where a high rate of urban growth may cause a higher-than-expected rate of traffic growth. However, the growth of truck volumes may be less than that for passenger cars.

High growth rates do not apply on two-lane-rural roads and residential streets where the primary function is land use or abutting property service. Their growth rates may be below 2% per year (projection factors of 1.1 to 1.3).

Some engineers suggest that the use of simple interest growth rates may be appropriate, rather than compound interest rates, which when used with a long design period may predict unrealistically heavy future traffic.

The other method of estimating design ADT is based on capacity—the maximum number of vehicles that can use the pavement without unreasonable delay. This method of estimating the volume of traffic should be checked for specific projects where the projected traffic volume is high; more traffic lanes may be needed if reasonable traffic flow is desired.

The average daily truck traffic in both directions (ADTT) may be expressed as a percentage of ADT or as an actual value. The ADTT value includes only trucks with six tires or more and does not include panel and pickup trucks and other four-tire vehicles.

The data from state, county, or city traffic-volume maps may include, in addition to ADT, the percentage of trucks from which ADTT can be computed. For design of major Interstate and primary system projects, the planning survey sections of state depart­ments of transportation usually make specific traffic surveys. These data are then used to determine the percent­age relationship between ADTT and ADT.

ADTT percentages and other essential traffic data can also be obtained from surveys conducted by the highway department at specific locations on the state highway sys­tem. These locations, called loadometer or weigh-in-motion stations, have been carefully selected to give reliable information on traffic composition, truck weights, and axle loads. Sur­vey results are compiled into a set of tables from which the ADTT percentage can be determined for the highway classes within a state. This makes it possible to compute the ADTT percentage for each station. For example, a highway department loadometer table (Table W-3) for a Midwestern state yields the following vehicle count for a loadometer station on their Interstate rural system:

Therefore, for this station:

This ADTT percentage would be appropriate for de­sign of a project where factors influencing the growth and composition of traffic are similar to those at this load­ometer station.

In most design problems, it is assumed that the weights and volumes of trucks traveling in each direction are fairly equal—50-50 distribution—the design assumes that pave­ment in each direction carries half the total ADTT. This may not be true in special cases where many of the trucks may be hauling full loads in one direction and returning empty in the other direction. If such is the case, an appro­priate adjustment is made.

Data on the axle-load distribution of the truck traffic is needed to compute the numbers of single, tandem, and tridem axles* of various weights expected during the design per­iod. These data can be determined in one of three ways:

(1) special traffic studies to establish the loadometer data for the specific project;

(2) data from the state highway department's loadometer weight stations (Table W-4) or weigh-in-motion studies on routes representing truck weights and types that are expected to be similar to the project under design;

(3) when axle-load distribution data are not available, categories of representative data for different types of pavement facilities.

The use of axle-load data is illustrated in Table 5 in which Table W-4 data have been grouped by 2-kip and 4-kip increments for single- and tandem-axle loads, re­spectively. The data under the heading "Axles per 1000 Trucks" are in a convenient form for computing the axle-load distribution. However, an adjustment must be made. Column 2 of Table 5 gives values for all trucks, including the unwanted values for panels, pickups, and other four-tire vehicles. To overcome this difficulty, the tabulated values are adjusted as described in the Table 5 notes.

Column 4 of Table 5 gives the repetitions of various single- and tandem-axle loads expected during a 20-year­design period.

Aside from the load safety factors, a degree of conserv­atism is provided in the design procedure to compensate for such things as unpredicted truck overloads and nor­mal construction variations in material properties and layer thicknesses. Above that basic level of conservatism (LSF = 1.0), the load safety factors of 1.1 or 1.2 provide a greater allowance for the possibility of unpredicted heavy truck loads and volumes and a higher level of pave­ment serviceability appropriate for higher type pave­ment facilities,

In special cases, the use of a load safety factor as high as 1.3 may be justified to maintain a higher-than-normal level of pavement serviceability throughout the design period. An example is a very busy urban freeway with no alternate detour routes for the traffic. Here, it may be better to provide a premium facility to circumvent for a long time the need for any significant pavement main­tenance that would disrupt traffic flow.