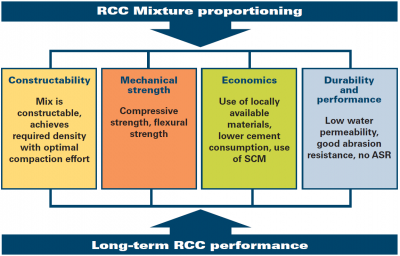 Proper mixture proportioning is crucial in creating a high-performing RCC mixture for an RCC Pavement. There are a number of factors that should be considered when designing an RCC mixture and they include constructability, mechanical strength, economics, durability and performance. There are two general approaches to mixture proportioning. The first is the soil compaction approach, which determines the proportions of cement and aggregate based on the optimum moisture content and the maximum dry density. The second method is the consistency or workability approach, which is a w/cm approach, with the consistency kept constant and the mixture determined by absolute volume. These two approaches are the basis for the four main mixture proportioning methods.

The four main proportioning methods are the soil compaction test, concrete consistency test, solid suspension model, and the optimal paste volume method. The soil compaction method is the most common in the U.S. for RCC pavements. The methods all strive to ensure that the mixture has sufficient paste volume to coat the aggregates and fill the voids. Another goal is to produce the required fresh properties such that the RCC can be placed in addition to the proper hardened properties such that the pavement can be durable enough to endure the traffic loading and environmental conditions that it is subjected to.

The materials selection of an RCC mixture is very important to the mixture design. The RCC should be designed with well-graded aggregates to optimize paste content and minimize void space, while also reducing segregation and producing a dense, smooth, tight surface. The water content should be such that the mixture is dry enough to support the weight of the rollers yet wet enough to ensure an even distribution of cement paste. The cementitious materials should meet strength and durability requirements. Chemical admixtures can also be utilized but will perform differently than in conventional paving concrete.

There are four main mixture proportioning methods. The most common one for RCC pavements is the soil compaction method. The other methods, including the concrete consistency test, solid suspension model, and the optimal paste volume method, are more commonly used for hydraulic structures such as dams and spillways but can also be used for pavements.

The soil compaction method is a six step mixture design method for roller-compacted concrete pavements. This method is the most commonly used method for RCC pavements. The density and moisture content relationship is manipulated to produce the maximum density. This is done by compacting samples over a range of moisture contents. The soil compaction method determines the mixture proportions required to meet strength requirements but does not directly consider such issues as durability, constructibility, etc.

The first step in the soil compaction method is to optimize the aggregates from the perspectives of gradation, segregation resistance, and compactibility. A maximum-density grading should be targeted for the combined aggregate gradation. One method used to achieve a maximum density (for any aggregate size) is a 0.45-Power curve [1]. Most construction specifications will specify upper and lower limits for the combined aggregate gradation; generally the 0.45-Power curve falls in the middle of these two limits.

This method involves fixing two mixture parameters while varying one other mixture parameter. For example, amount of aggregate and cementitious content might be the two variables that remain constant while the water content is changed. For each combination of parameters, the consistency is measured using the Vebe consistometer (ASTM C1170). This process is iterated until the required level of consistency is met. Strength properties should also be checked for compliance. This method has largely been used for the design of hydraulic structures.

This method is similar to the solid suspension model in that its objective is to fill the voids in the aggregate structure with sufficient paste such that, after compaction, there are no voids in the mixture. This method therefore minimizes the paste content required to fill the voids present in a given aggregate structure. Also similar to the solid suspension model, this method has seen little use in industry.