Although all roller-compacted concrete (RCC) pavements are constructed as plain, unreinforced, and undoweled pavements, their structural behavior is similar to that of conventional concrete pavements. Both pavements types have the same thickness design philosophy: maintaining fatigue damage and flexural stress on the pavement caused by wheel loads within acceptable limits. The slab tensile stress and more importantly, the ratio of this stress to the flexural strength (which is called the stress ratio), is the most important parameter in terms of fatigue damage. This page provides an overview of some RCC thickness design procedures. There have also been RCC thickness design procedures suggested by researchers that are not covered here.

Previous research has shown that RCC fatigue behavior is similar to that of conventional concrete pavements. Therefore, it has been suggested that conventional concrete pavement design software such as StreetPave or WinPas can be used, with the recommendation that the reliability level be increased by 5%, for designing RCC pavements. The joint performance (i.e. load transfer efficiency) of RCC is crucial to the fatigue performance since RCC relies solely on aggregate interlock at the joints (where stresses are greater than the interior of the slab) to provide load transfer. Thus it is especially important to be aware of the default load transfer assumptions of the design software.

The subgrade, subbase, and/or base design for RCC should have sufficient bearing capacity so that adequate compaction of the RCC layer(s) can be achieved.

Design examples for each design procedure presented below can be found in the Guide for Roller-Compacted Concrete Pavements[1].

The pavement engineer can use the RCC-PAVE software or manually solve for pavement thickness using nomographs and charts developed for RCC-PAVE. RCC-PAVE makes the following design assumptions: 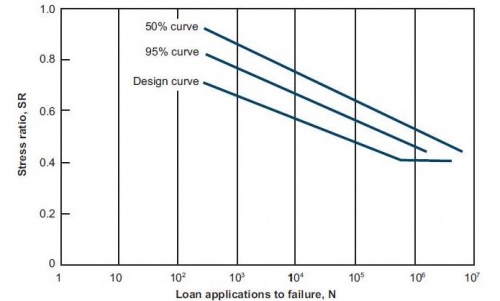 The USACE procedure accounts for traffic in terms of equivalent single axle loads of 18 kips. One design chart is used for all pavement applications (i.e. roads, parking lots, and storage areas) and zero load transfer is conservatively assumed across joints since the only mechanism of load transfer is aggregate interlock. The design procedure has three choices for bond condition (full, partial, or no bond).

Designing RCC for average parking lots (i.e. not heavy-duty industrial parking lots) can be done using the procedure from Design and Construction of Concrete Parking Lots (ACI 330R-08) with the "no dowel" option. This essentially treats RCC as a conventional concrete pavement without dowels. The default design life using ACI 330R-08 is 20 years.

There are three design methods that are typically used for thickness design of RCC pavements for streets: Guide for Design of Jointed Concrete Pavements for Streets and Local Roads (ACI 325.12R-02), StreetPave, or WinPAS. ACI 325.12R-02 has a default design life of 30 years and requires the subgrade k-value, RCC flexural strength, traffic classification, and annual average daily truck traffic (ADTT) for design. Care should be taken when determining whether or not the RCC pavement would be considered to have a tied shoulder or curb and gutter.

The main difference between StreetPave and ACI 325.12R-02 is that StreetPave uses a variable design curve that depends on user-selected reliability and percent cracked slabs. It is recommended to increase the reliability by 5% when using StreetPave to design for RCC. The option for undoweled joints should be selected. For thicknesses greater than 8 inches, StreetPave automatically requires dowels and therefore the designer should switch back to ACI 325.12R-02.