Roller-Compacted Concrete (RCC) is a special type of concrete that incorporates typical concrete constituents (i.e. aggregate, cement, water, etc.) but in different proportions. Due to the dry nature of RCC, it is placed using a paver and rollers, similar to the construction process of asphalt concrete. The processes for producing and constructing RCC pavements are detailed below. The American Concrete Pavement Association (ACPA) has recently published a guide specification titled: Roller-Compacted Concrete Pavements as Exposed Wearing Surfaces which provides recommendations for specification writers or anyone interested in constructing RCC pavements [1]. 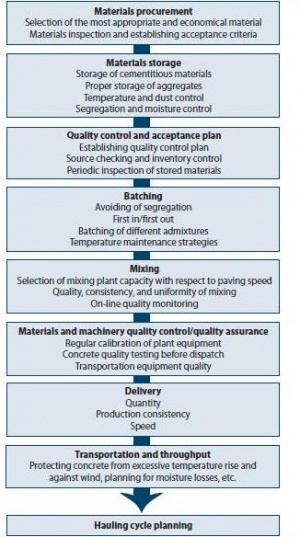 As with any concrete, the verification of source constituents is important. For example, ensuring that cement meets ASTM C150 standards or admixtures meet ASTM C494 or that the aggregates have either been bench-qualified at the quarry or have passed pertinent durability tests are all crucial to the successful production of quality concrete. For RCC, it is especially important to verify the consistency of the aggregate gradations. Materials selection for RCC is especially important due to the effects of the aggregate gradation on constructibility and hardened properties of RCC. Mixture Proportioning of RCC is much different than conventional concrete pavements where the design philosophy revolves around the water-to-cementitious ratio (w/cm) whereas RCC revolves around cementitious content and moisture-density plots.

Handling and Storage of RCC Materials

The handling and storage of cement, supplementary cementitious materials (SCMs), chemical admixtures, and water is similar for RCC and conventional concrete production. The main difference is the handling of aggregates. Due to the fact that RCC is 85% aggregate (by volume), in addition to the dry nature of RCC, aggregates play a large role in workability/constructibility of the RCC as well as the hardened RCC properties (i.e. strength, durability, shrinkage, etc.). Therefore, extra care must be taken in the handling and storage of aggregates for use in RCC to minimize segregation and moisture fluctuations. Differences in moisture content throughout an aggregate stockpile, if unnoticed, can be detrimental to an RCC mixture since small fluctuations in moisture content will lead to difficulty in obtaining the required, compacted density. Ideally the combined aggregate gradation will not change from batch to batch and therefore if segregation occurs and is noticed, relative proportions of coarse, fine, and intermediate aggregate (if used) should be adjusted to account for the segregation. 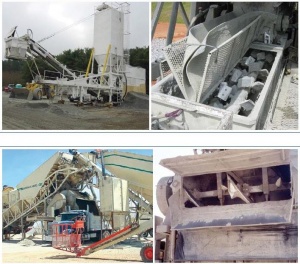 RCC is typically batched and mixed in one of three ways: tilt drum mixer, transit mixers, or a pugmill mixer. The tilt drum mixer, which is commonly referred to as a central batch plant for conventional concrete, and transit mixers (i.e. ready mix trucks) are referred to as batch plants. Batch plants mix RCC in discrete batches with the maximum batch size typically less than that for conventional concrete due to the dry, stiff nature of RCC. The pugmill mixer is referred to as a continuous flow plant since materials are fed into the mixer at the same rate that RCC is discharged out of the mixer. Continuous flow plants have total mixing times on the order of 10-30 seconds and can produce large amounts of material while maintaining excellent mixing efficiency.

Subgrade, Subbase, and Base Course Preparation

The first step in RCC pavement construction is to prepare the underlying pavement layers. The subgrade should be compacted to a minimum of 95% of the maximum dry density (MDD) determined according to ASTM D1557. If the natural soils on the project site are weak, readily hold a large amount of water, or if a stronger construction platform is required, stabilization (chemical or mechanical) might be specified. Any granular layers (subbase and base) should also be compacted to sufficient density to provide a stiff base that allows for proper compaction of the RCC. The granular layers are especially useful for draining water from underneath the pavement to prevent saturation of the pavement which speeds up most deterioration mechanisms. The subgrade, subbase, and base should be uniformly moist at the time of RCC paving to prevent these layers from pulling water from the RCC and affecting its material properties.

RCC is typically transported in dump trucks however it can also be transported in transit mixers (i.e. ready mix trucks). However, due to the dry consistency of RCC, fluidizing admixtures are sometimes used when transporting RCC in transit mixers. The amount of trucks and scheduling of trucks is an important issue that will depend on factors such as: mixer throughput, distance from plant to site, paving speed and capacity, climate, and time of day. In order to prevent contamination of the RCC, trucks should be cleaned frequently by washing out any RCC leftover from previous loads. In order to preserve the optimum moisture content (OMC) of the RCC from the mixing plant to the site, the mix should be batched slightly higher than the OMC and tarps should be used when transporting RCC in dump trucks. Also, the transportation time should be kept to a minimum such that the time between initial mixing of the water and cementitious materials and the RCC being placed into the paver hopper should be no more than 45 minutes (less if temperatures are above 80F). Care should be taken whenever handling RCC or during loading/unloading to minimize segregation. RCC should be uniformly placed in the dump trucks rather than mounded in the center.

Test strips are extremely useful for validating the design, construction methods, curing process, joint construction, and field testing of RCC. The test strip serves the purpose of convincing the owner that 1) the mix design is adequate 2) the contractor can successfully pave RCC and meet density requirements 3) cores can be taken to verify that strength requirements are being met. Overall, the use of test strips to verify paving operations before the commencement of paving has been crucial for projects where issues with compaction, meeting strength, or the mix design were encountered during construction of the test strip. One of the largest benefits of test strips is the ability to develop a roller pattern that will result in sufficient compacted densities.

RCC is typically placed with an asphalt paver which should be able to place RCC to at least 80% of the reference wet density before rolling begins. To prevent segregation or bumps/depressions, the hopper should never be allowed to become completely empty and the paver should be continuously moving forward. Usually there is a 10-25% difference in thickness of the RCC layer from when it is paved to after compaction has been completed; this is called "roll down." RCC can be placed in up to 6" lifts with typical asphalt pavers or up to 10" lifts with high-density asphalt pavers. Subsequent lifts should be placed within 60 minutes of each other to be considered fully bonded. Most state specifications only allow 45 minutes from the time of mixing until completion of compaction. Another location where timing is critical is longitudinal joints. If there is too much delay between adjacent lanes, the joint will become a cold joint and there will not be a good bond between the two paving lanes. Some methods to avoid this issue are to cover longitudinal joints in wet burlap until the adjacent lane is paved, using staggered pavers, or evaporation retarders. Curbs, gutters, and recessed drains can be installed before or after RCC placement; manholes are more easily installed after the RCC has been placed, compacted, and gained sufficient strength to withstand saw-cutting.

Compaction is a key step in RCC construction; this step determines the density, strength, permeability, smoothness, durability, and many other hardened properties of the RCC pavement. Typically a 10-ton dual-drum vibratory roller is used immediately after placement while a smaller, static drum roller or a rubber tired roller can be used, after the required density has been met, to remove surface cracks/tears and create a smooth, tight surface. Hand compactors are useful for tight areas or immediately adjacent to obstructions such as curb and gutter. RCC that is too wet will appear shiny and pasty and exhibit "pumping behavior" during compaction while RCC that is too dry will appear dusty or grainy and might result in surface tearing. In either case, aggregate segregation is likely to occur and it will be difficult to meet the required density. It is recommended that compaction be completed within 15 minutes of spreading and 45 minutes of initial mixing. The vibratory compactor operator should exercise caution when near the edge so that edge collapse doesn't occur as a result of excessive vibration.

Longitudinal construction joints are formed when successive lanes are not compacted within 45-60 minutes (depending upon project specifications). Fresh longitudinal joints are constructed by leaving the outer 12-18" of the paving lane uncompacted and then switching the paver to the adjacent lane, setting the screed to the height of the previously paved lane, and then centering the vibratory roller over the freshly paved joint while all of this occurs within 45-60 minutes of initial mixing of the RCC from the first lane. Cold longitudinal construction joints result from delays greater than 45-60 minutes in paving of adjacent lanes. This will lead to poor load transfer across the longitudinal joint and if not treated properly, can lead to reflective cracking. The figure below shows proper paving of a fresh longitudinal joint as well as rolling patterns for fresh and cold vertical joints.

These cold joints typically occur at the end of the paving day. After compacting, the end of the lane will be rounded down; this portion should be cut away, such that the new end of the lane is fully compacted RCC that is at specified grade, before paving restarts. When paving against a cold joint, material overlapping onto the cold joint should be removed before compacting otherwise this will lead to undesirable raveling and spalling.

Sawing of joints causes cracks to remain tighter (i.e. smaller crack widths) therefore improving aggregate interlock at joints. Since no dowel bars or reinforcing steel is used in RCC, aggregate interlock is the sole mechanism for load transfer across joints.

Curing is crucial to the development of RCC strength and durability. Since RCC does not contain bleed water, evaporation pulls water from the paste which leads to shrinkage cracking, shallow microcracks, and surface deterioration. Typically a white curing compound conforming to ASTM C309 is used for RCC pavements. Whether a curing compound is used or moist curing via a water truck or wet burlap is used, the curing process should begin immediately after final compaction in order to minimize evaporation.

The time between paving and opening of the RCC pavement to traffic depends on three main factors: early age development of RCC mechanical properties, pavement loading, as well as ambient day and night temperatures. A good rule-of-thumb for opening RCC pavements to traffic is when compressive strengths reach 2,500-3,000 psi.